Do you find Test Driven Development (TDD) good in theory but hard to practice? Do you think it requires too much discipline and you don’t have time? Or, are you just struggling to get your workflow streamlined? Fighting to glue your tools together?

Well, you can improve a lot, by borrowing some tricks from me. I’ve practiced TDD with Ruby for many years now, and built an entire web framework only with these techniques.

They are simple, effective and easy to learn.

In the past, we talked about time management and Vim setup Today we’ll focus on Tmux setup to easily switch between projects.

What is Tmux for?

Tmux is a terminal multiplexer. With a single session you can attach and detach several background processes.

While I use just Vim for projects that don’t need any specific setup. For instance, most of the Lotus gems are just Ruby and don’t need running services to work on them.

A different case are freelancing projects (usually web apps), that need one or more datastore (Postgres + Redis), a running server, console, logs, etc.. In this case I use Tmux to simulate an UNIX based IDE. With just one command I can start to work on a project.

One Command To Rule Them All

Tmux is scriptable, so we can configure the instructions that it has to follow at the startup. I crafted a BASH script named code for that.

In the morning, if I have to work on a project named bookshelf, with just code bookshelf, I have my development environment up and running in a second. 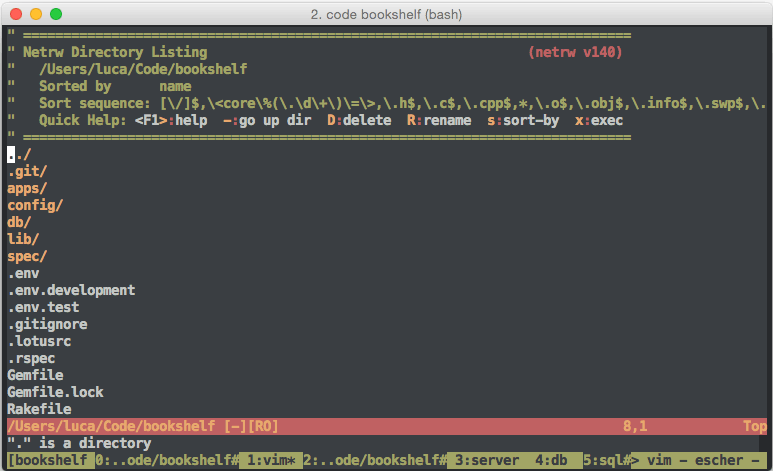 At the bottom of the screen, there are numbered windows. For each window you can have one or more split screens (panes). Usually, Vim is at 1 and Lotus server and console are at 2. If I have to edit, I can switch to the first window with Ctrl+f 1 or jump to the console with Ctrl+f 2.

This helps to quickly move back and forth between several tools that I need.

I borrowed my general configuration from @vjt a few years ago, and it still works like a charm.

There are a few amazing features in that script:

You can add several customisations to that script, Tmux is really powerful!

We can specify for each project, some specific layout for our windows.

Let’s see what that means. I have the first two windows with full screen Vim and shell. The third one has a split between the server (70%) and the console (30%, see -p 30 option). The remaining are for database shell, Postgres and Redis servers.

The last command tells Tmux to select the window named vim at the boot time. Please note that window names are arbitrary.

With a combination of two great Vim plugins by Joshua Davey (slime.vim and vim-turbux), we can send commands to a Tmux pane.

This technique is used to run RSpec examples, and let the pane to be invisible if specs are successful, and to remain open in the opposite case.

I use it, alongside with vim-greenbar, which is able to report the current TDD status (green/red) by colouring the Vim status bar.